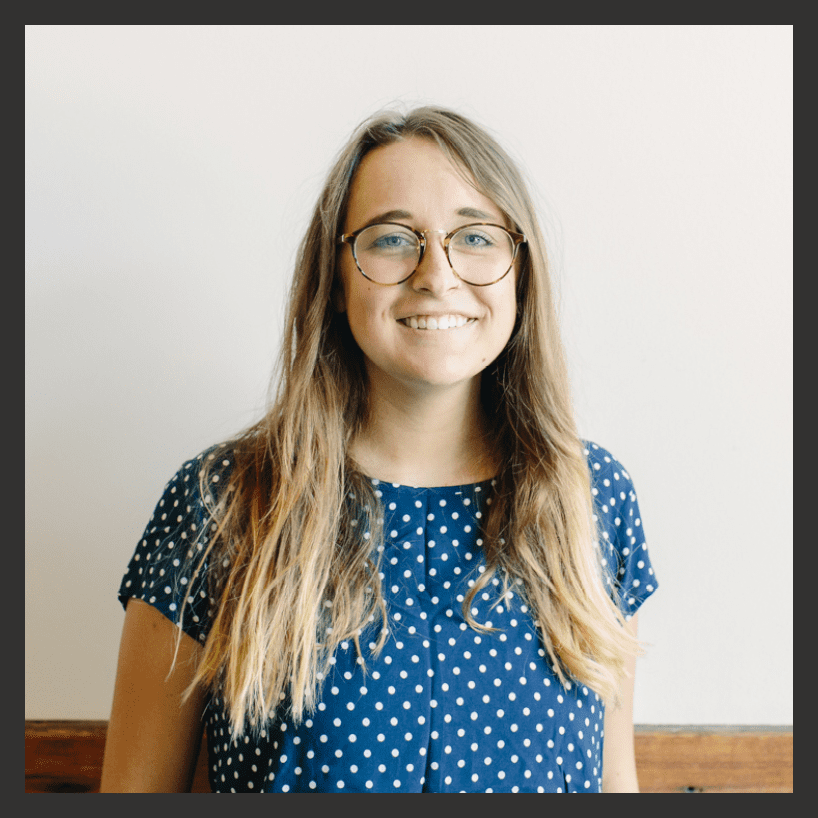 Join us in welcoming Chandler Johannsen back to the empire! Chandler was an 818 intern during her junior year of college and has returned as a full time designer. Read more to get to know her!

Q: Where were you born?
A: I was born in Sioux Falls, South Dakota!

Q: How would your team describe you?
A: Hmm…I’ve been told that I have a quiet confidence…but I don’t feel confident saying that, so they were probably using a kind word to accompany the word ‘quiet.’ I’m proficient in telling Dad jokes, I’m fairly organized and I prefer listening over talking 90% of the time. Overall, I would say that I’m the player with most assists on the basketball team rather than the person always shooting– I wouldn’t have it any other way.

Q: What is your design background?
A: I just graduated this May with my BFA in Graphic Design from Iowa State, where I did numerous odds ‘n ends freelance jobs, including my favorite one thus far– I teamed up for awhile with Burgie’s Coffee in Ames, where I helped create new handwritten elements for their website & for social media promotions, I revamped their huge chalkboard menus, and I designed a trio of new shirts, (printed by my pal Skyler Prenosil of CLZN Co.), that the community now sports proudly. I published a children’s book during my final semester of college, I was co-editor-in-chief of Revival Magazine on ISU’s campus for my last 2 semesters and I coincidentally interned previously with 818 during the spring semester of my junior year.

Q: What areas of design are you most passionate about?
A: I would say that I’m most passionate in the realms of illustration & typography, where I often love to combine the two– I love doodling with pen and paper, & then making my drawing(s) come to life on the computer. I also love social design + designing for good. One of the best projects I was part of during my time at Iowa State was when I took a class that was literally called ‘social design.’ The entire semester was devoted to identifying a need or problem, brainstorming ways to address or solve the problem, and then using design to exploit, educate or alleviate the problem. I was on a team of five other students and we created an anti-pornography guerilla-styled campaign that stretched throughout an entire semester, and we remained anonymous until our final reveal at the end. We called ourselves ‘Peter’ and used reverse-psychology to spark people to care about our topic– it was awesome.

Q: What is something you always carry with you?
A: A good pen– you never know when you’ll have an opportunity to draw something.

Q: What accomplishment are you most proud of?
A: Like I mentioned in my design background overview, I published a children’s book titled “What It’s Like” during my final semester at Iowa State, which I would say is probably something I’ve done that I’m most proud of. I’m not proud of this project because of the sheer fact that I did it, but entirely because of the reason(s) behind doing it & the inspiration that came from my loved ones along the way.

Q: What do you like to do in your free time?
A: In the little free time that I have right now between planning a wedding & other life things, I love to spend time with all the near & dear loves in my life, I enjoy reading and cooking, I happily claim that I drink copious amounts of coffee and seek out the places that serve it, and I like being outside more than I do inside– camping & hiking are two of my favorite things ever. I also enjoy perusing through antique stores and riding my bike.

Q: What are you most excited about at 818?
A: Being back at 818 is so surreal, especially since this time around my role has shifted into the spot of a full-time designer, rather than a part-time intern. I already love being back in the tiny design empire, and I think moving forward, I’m just excited about all of the fun projects that I know will continue to come our way. The dynamic in the office is great and and I love that playing loud is something that happens on a daily basis.