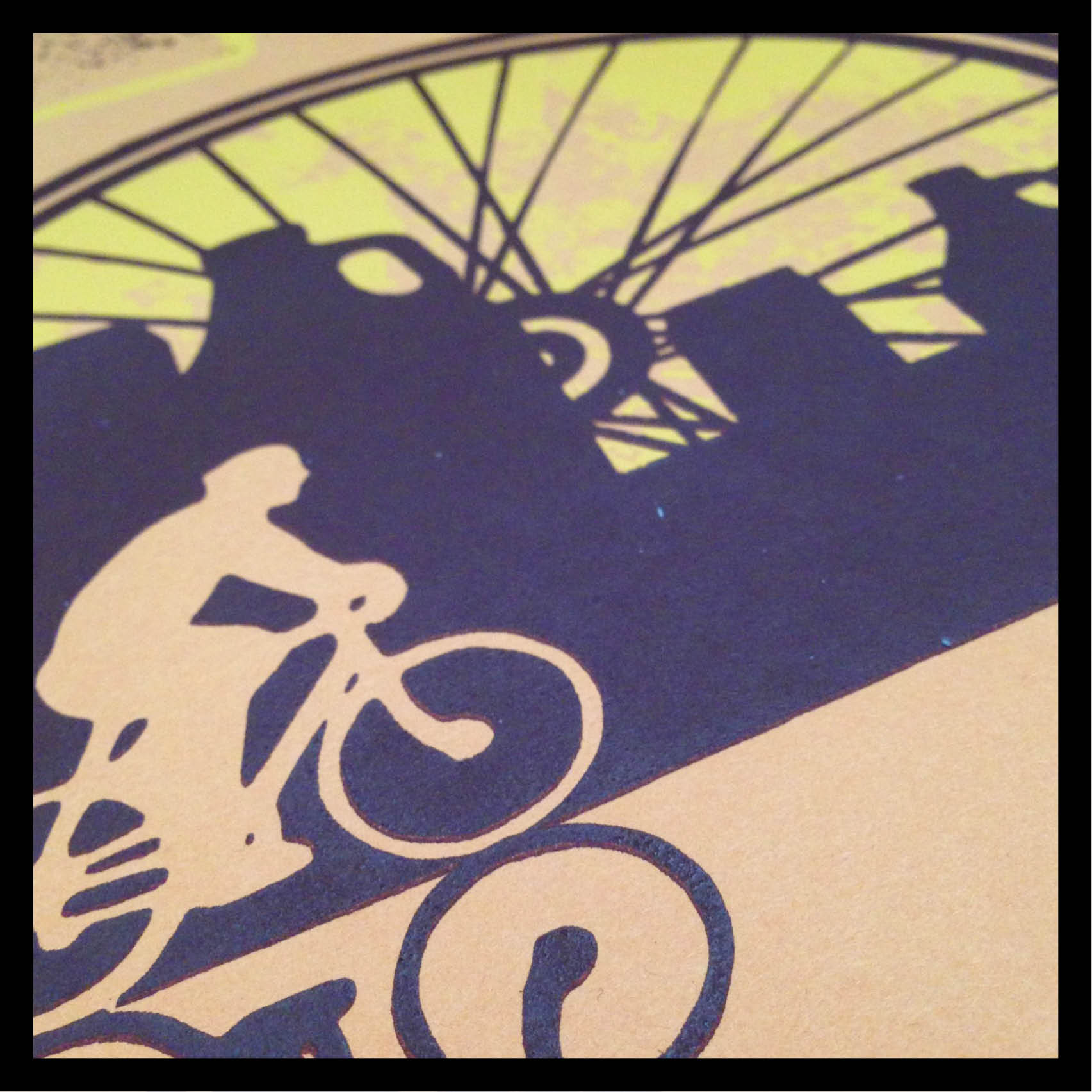 Bike Month occurs every May in Iowa and while there were many celebrations and festivities there is one in particular bike lovers and artists alike look forward to. PedalArt (formally known as ArtCrank) is a bicycle poster show showcasing original artwork from local and regional artists focused on bicycle themes.  The event is free and open to the public where people can view the posters, meet the artists and even make a purchase (or three). After the opening reception, the posters continue to be available for purchase at a local retail shop, Raygun, until June 14.

How did 818 decide to enter

The 818 ladies have been long-time fans of the PedalArt show, attending the event almost every year. With the opening of the tiny empire this year, what better time to enter their favorite bike-themed poster show than now? So, they gathered up some design examples, submitted into the show and received word that they were accepted.

In addition to the overriding themes, they also really wanted to include an ambigram. Ambigrams have shown up a few times in 818 design (most notably in the 818 logo as the ability for the design to have meaning from multiple viewpoints is intriguing. For the poster, this meant the design would have two scenes within one poster – so it could be hung right side up or upside down. They landed on creating a day and night scene.

The design started with a pen and paper. Learning to draw beer and taco ambigrams took some brainpower, and a lot of practice. There were other hand touch elements as well. The illustrated cloud texture was created by inking the sides of physical tacos (hard shell and soft shell – you know, for variety) and pressing them on to paper. The rest of the poster was digitally rendered.

My first project with the girls of 818 was screenprinting the Pedal Art posters. Screenprinting is a time consuming and laborious process where many people love the product and few people fall in love with the process. Let me walk you through what we did.

Digital files were printed on transparency film in black ink.

The screens were coated with emulsion and prepped for exposure, which was done by laying the transparency paper on a light table with the coated screen on top in a dark room. The table and screen is then covered and the light is turned on to expose the screen much like photography film.

The screens are then washed out and the space where the image was has been cleared of the coating allowing ink to pass through.

While the screens air-dried we mixed ink for the two colors of the poster and cut the paper (thanks, French Paper). This also takes time as we wanted to find the perfect color for our posters. The trick with screenprinting ink is the consistency and thickness of the ink as this effects how well the ink goes through the screen. One must also remember that ink dries darker and makes mixing the correct color of ink a learned talent as well as a bit of trial and error.

Once the screens were dry we placed them on the vacuum table and registered our paper underneath. I pulled the first color and waited for them to dry. I then rinsed out the screen and exposed the second screen which had the second layer’s image exposed on it. Registration (aligning the poster just right so the next layers of color line up with the first layer) is a tricky step of screenprinting and part of what makes it so time consuming. While mis-registration is sometimes a desired look or can be used as a design element when done intentionally, it is always important to take your time with registration.

Once both colors were printed they were laid on the drying rack to completely set and were ready to be trimmed and signed by the 818 crew. And that was that – the posters were ready to be displayed!

818 had a blast at the event eating mac and cheese cupcakes (what the hell were those things?!), checking out all of the awesome artwork and meeting our fellow artists in the show. High fives were even given to each patron walking around with an 818 poster purchased and wrapped in plastic! It was one of those nights where you’re reminded of how awesome Des Moines is.

We’ve enjoyed the experience so much we’re already planning ideas for next year!