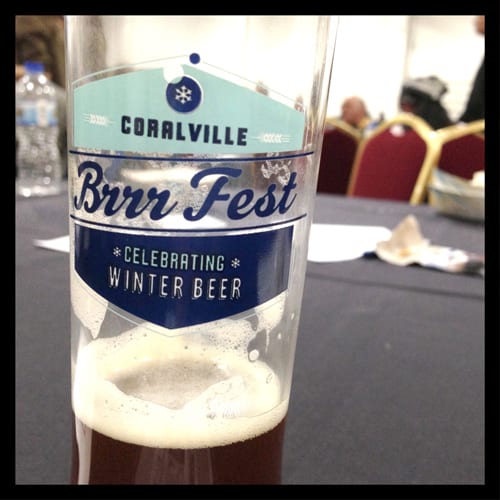 What is there to do when it’s the middle of winter and 818 is getting tired of the cold? Go to a craft beer event! Melissa and I packed up last weekend for a trip to Coralville, Iowa to attend the 2nd annual Brrr Fest.

Brrr Fest is an event that promotes Midwest brewers and their winter beers. It’s a non-profit organization that benefits the Iowa Brewers Guild and Coralville’s annual 4th Fest celebration. This year’s event (which sold out) was at the Marriott Exhibit Hall, where around 2,000 people attended to sample beers from over 40 breweries. It was fun seeing so many people enjoying good beer at once.

Many of Iowa’s local breweries were represented, including a couple of our current clients — Confluence Brewing Company and Great River Brewery. John, Katie and Ken from Confluence were serving some great beers, as always. However, because we were running behind, we didn’t get a chance to taste Great River’s beer at their booth — everyone else beat us to it and they were all out. Luckily, there was plenty of other beer to go around. Some of our other favorite booth stops were Toppling Goliath, Peace Tree Brewing, Backpocket Brewery and Nebraska Brewing.

After the event, Melissa and I walked next door and visited Backpocket Brewing. It was the first time either of us had been there, and wow — what a cool place! The interior is beautiful and all of the brewery equipment was prominently on display. We grabbed a seat by the bar, enjoyed a Slingshot brew and ordered a Chicken BBQ pizza (which was amazing, thanks to the healthy amount of cilantro!). We finished the evening by meeting up with our friends Ken and Dave at a local bar in Iowa City called the Sanctuary Pub. It had cozy seating next to a fireplace, great beer selection and a large front window which provided a great view of the Iowa City shenanigans that occur on a Saturday evening. Great way to wrap up a great day.