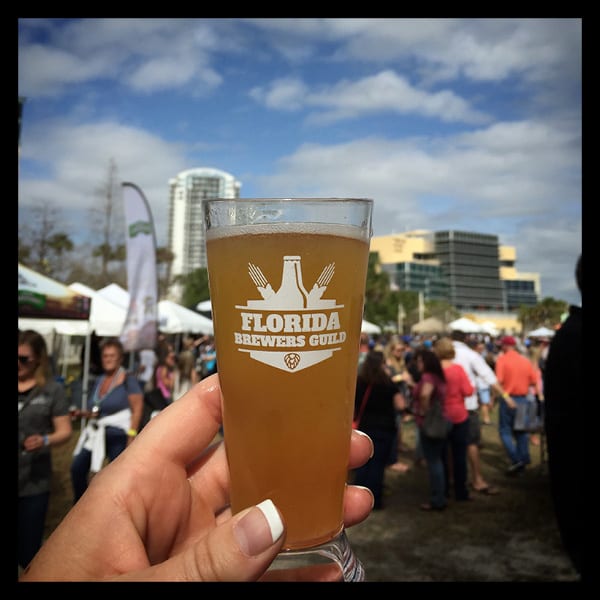 Upon arrival just about anywhere, there are two things I tend to do… First, assemble a mixed 6-pack of what largely distributed beer is available in that area but not in Iowa and second, I study the local beer options to see what’s happening. I’m definitely interested in the product, but as a designer, naturally, I’m more drawn to design and packaging. On day 1 in Florida, I was immediately intrigued with a new player in the game, Coppertail Brewing out of Tampa. Insert major design envy here. And, after sampling the beer, there was equal success, which is the best combination. Good Brand + Quality Product = Magical. There was also a large variety of canned beer available from local brewers, which is great since there are so many outdoor activities in the area where glass is not welcome. To name a few Florida canners… Cigar City Brewing, St. Pete Brewing, 3 Daughters Brewing, Tampa Bay Brewing, Big Top Brewing, Orange Blossom Brewing. And, have you heard about Crowlers? I can’t wait until these make their way into Iowa breweries!

Day 2 brought me to the kick-off of Tampa Bay Beer Week at the Florida’s Craft Brewers Guild Beer Festival. [If you are an Iowa reader and craft beer lover, this is a similar event to the Iowa Craft Brew Festival organized by the Iowa Brewers Guild which this year will be on June 20, 2015 in Des Moines, so plan on attending!] The Florida festival was in a park setting in downtown Tampa and just about all the local breweries I saw on the shelves were represented, so I was able to experience their beer and brand in person. It’s impossible to try everything at a festival, but from the samples I tried, those who stood out to me most were 7venth Sun, Cigar City, Coppertail, Funky Buddah and Green Bench. One of our star clients, Confluence Brewing Co. from Des Moines, was in Tampa helping Veterans United Craft Brewery serve at the festival. It was awesome to share some of the Florida beer experience along with Confluence. After the festival, we all stopped by my aforementioned brewery crush, Coppertail Brewing Co. and scoped out their brewery and taproom. To me, their space and atmosphere was the icing on the cake. If you are ever in the area, this is a must visit.

Tampa Bay Beer Week (TBBW) provided momentum for MANY great beer events in the area during the week of March 7-15, and I was able to attend a few. Where I was staying was walking distance to Mad Beach Brewing, so I became somewhat of a regular there during the week. One TBBW event they hosted was a movie night, which showcased a fascinating documentary called “Blood, Sweat and Beer,” created by the talented duo of Chip Hiden and Alexis Irvin. Their quick synopsis of the documentary is, “Blood, Sweat, and Beer is a feature documentary about the explosive growth of the craft beer industry and the dramatic journeys of two start-up breweries.” You can watch the trailer and find more information on their website. After the screening, I introduced myself and talked with them a little about their filming experience. They are such talented and inspiring people. I’m working on coordinating a time that works to bring them to Des Moines for a screening!

Another TBBW event I made it to was “Foeder For Thought” at Green Bench Brewing. There were dozens of wood fermented beers on tap at different stations available for sampling (list here) and the atmosphere was perfect for a week of celebrating beer culture. While downtown St. Petersburg, I also stopped by St. Pete Brewing and Cycle Brewing to investigate their taprooms. And, finally, what 818-er can pass up a quaint restaurant called Casita Tacqueria that boldly displays on their façade “Beer. Tacos.”… What else does one need? 🙂

If you want to hear more about the experience, next time we meet, I’d be happy to share! My reflections at the end of the week are that Florida and the Tampa Bay area have a growing and vibrant craft beer community with many exciting and interesting nuances to discover. Big thanks to all the Tampa Bay Beer Week organizers and participating businesses for making TBBW an awesome experience for the locals and visitors!

The Tampa Bay Beer Week experience serves as a nice transition to announce that 818 is leading Des Moines Beer Week (DSMBW) efforts in 2015! We are currently working on developing the brand and website where businesses can submit events to for the official DSMBW calendar. Be sure to put June 14th – 20th on your calendars as it will be a fun-filled week! We have been talking with the Iowa Brewers Guild, breweries, bar & restaurant owners and local distributors on how we can all work together to make Des Moines Beer Week a successful celebration for everyone in the Des Moines metro area. Stay tuned for more information in the coming weeks!